I was really looking forward to attending the BT Vehicle for Change event this morning. After all the invite had said:

The interactive environment at the BT Centre showcase in London has proven to be an extremely successful tool in  helping different organisations and businesses to gear up for a changing world. But it is not always easy to get to London, so BT have developed the Vehicle for Change – an interactive road show that will bring the showcase to customers throughout the UK. 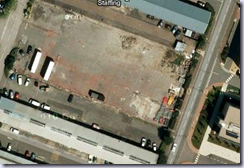 I sent in my application promptly on the 14th of November and had an immediate confirmation, then nothing until I phoned Oxonline, then quick trip down the M40/A34 but BT weren’t expecting me at the lovely plot on Milton Park, not a good start.

I have somehow managed to miss all the Oxonline events so far, for which I apologise to Councillor Roberts who opened the event.

The Councillor gave a brief overview of his BDUK campaign where Oxfordshire have been promised £3m+ providing they match fund it. He has put this forward into next years council budget and is “hopeful”, but this means nothing can be spent until next April at the earliest.

There is also some funding for the Oxfordshire Community Network. My broadband readers will remember the OCN, that great idea of a broadband network linking schools, libraries and public buildings running in a ring round Oxfordshire (but configured in an expensive point to point star configuration). Councillor Roberts mentioned Fire Stations which must be new. In 2002/4 I remember the OCN being trailed by most of the incumbent councillors as Oxfordshire’s way of bringing broadband to the local communities that BT had then chosen to ignore. They couldn’t because, if memory serves, the BT educational products they had used to provide it, at subsidised prices, had contractual clauses that prevented them being used for non educational uses, thus precluding the local business community from entering the broadband era. It looks like those contracts must still be in place as the OCN still cannot be used as back-haul for the rural communities it was intended to serve (though this morning Councillor Roberts blamed the EU).

As Councillor Roberts gave his presentation it brought back memories of 2002/4 when BT needed “broadband champions” to do their unpaid marketing for them and help their local communities have their exchanges enabled for ADSL. I have a certificate from BT Wholesale (before BT Openreach was created) thanking me for my efforts in enabling the Wroxton St Mary exchange (my campaign website is buried on here somewhere, see here.)

The Oxonline website could have been written in 2002/4 with all its statistics on the 80+ exchanges in Oxfordshire 25 of which (urban) BT has enabled for BT Infinity but has few customers. These 25 exchanges are also the ones that have been “unbundled” so other providers can compete -  the cherries in the network.

Then the presentation moved on to BT Next Generation Access:

For the next hour the Vehicle for Change Team will demonstrate some of the relevant cloud based services that can be enhanced by Next Generation Access methods. For example: BT Cloud Contact Centre, BT Compute (a hosted data centre offering), VPOD: The Government Pod which overcomes the communications gap, how it could deliver real benefits for government, by enabling staff to conduct face-to-face interviews without the need to be there in person. Agile working: how technology is an enabler to allow employees to feel empowered and to work flexibly.

It is no wonder that BT have so few BT Infinity customers, after receiving a lovely email from BT Business, yesterday, saying it had arrived in my area (a small rural exchange) well perhaps not 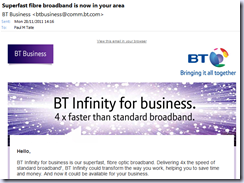 I was so looking forward to hearing where the advantages to NGA were, but the whole presentation could have been done much better on my home ADSL connection. First a static display of a corporate network while the presenter told us NGA saved us all the equipment needed to do Video conferencing that Skype has managed for several years and bits about the Cloud saving on hardware upgrades.

A video conferencing session using Microsoft Lync (the corporate version of Windows Live Messenger). This failed because it seemed the truck was only connected to a 3G signal. Even the local Wi-Fi signal was not used for the video display!

One would have thought that the all embracing BT would have parked the truck where they could just plug in to a BT Infinity connection, perhaps one of their exchange car parks – or are they owned by BT Openreach and not available to the BT department making the presentation.

Then a demonstration of BT Cloud Contact that again can be used on a standard ADSL connection.

So the whole event was a waste of time, I learnt nothing about hi speed internet, multiple concurrent connections, video streaming, HD video conferencing to multiple locations.

Oxonline needs our support but it looks like BT do as well, we have a technology that everyone wants but no one is buying because no one knows what to do with it. Until the “killer application” comes along we will be back in 2002 looking for high speed solutions to problems we didn’t know we had. The “killer application” in 2002 was simple it was “always on” giving rise to all the presence applications that abound today

See the full story on the BBC website, why oh why do the powers that be give BT money to do things it would do anyway!!

Thanks to Graham Cluley (@gcluley) of Sophos and the Naked Security website for introducing me to Fiscal from the Queensland Police.

I love his little videos, the third in the series covers ATM fraud and skimming:

All about ATM Skimming

The first covered Identity theft where Doris Pennywhistle, receives a phone call supposedly from her bank, asking her to confirm her account details. Unaware the caller is an offender and of the risks involved in providing personal information over the phone, Mrs Pennywhistle soon realises when Fiscal steps in. This animation is primarily aimed at raising awareness amongst our senior population and how to avoid becoming a victim.

The second covers social networking safety (Sofie (aged 13) learns of the risks involved in online social networking. This animation is primarily aimed at children and teaching them about how to enjoy the internet in a safe way.)

In a week where we have seen the local police forces joining Twitter these videos from Queensland show some of the way forward. I also found  Thames Valley Police Channel but no UK Fiscal Ferrets.

The original article that made me look was http://nakedsecurity.sophos.com/2011/08/19/do-you-know-enough-about-atm-skimming/

I was browsing my twitter feed this morning and remembered one of my followers/followees (?) had just spent some time changing their website and thought I would have a look.

Their twitter profile had their website link in it and I duly clicked it and found the landing page for their hosting company – oops.

What had been forgotten was that “www.domain.com” is a different website to “domain.com” they had omitted to make a second entry in their DNS server for “domain.com” easily done in the rush to launch. Some companies actually use it for a second machine for redundancy or extra pages. I have found internal servers using this function and being presented with Microsoft Small Business Server login screens before now, giving access to the local network with some username and password social engineering, not really where you want customers to end up even by mistake.

borrowed this image from SBS Diva’s blog, thank you.

I recently had a big debate with the branding department of a major UK  organisation where they said that “domain.com” looks better in documents than “www.domain.com” they had no idea of the ramifications when they did it on sites that they had no control over.

This made me think of how lazy our web browsing has become, we now use the browser address bar as a search bar:

This means we stop typing http:// or www and just enter the company name. We could end up anywhere !! Mostly Google, Bing etc. show you the right sites (after having noted your search history) but there are a lot of phishing sites out there ready to grab your details and they have been known to sell to you and take your money before you know anything about it.

I am not the only one that thinks this, HMRC has a page on it, all about emails but note the web links lower down

As do Microsoft, note the misspelt links on the page

The answer is to be very careful about DNS and your use of the search bar when you are surfing somewhere which holds your personal information and when you shorten things for Twitter feeds etc.

Do I have to worry about mobile malware and virus apps?

I do according to this infographic from Bulldog via ReadWriteWeb

At some point I will review my new phone a Samsung Galaxy S II Android one.

This is the Windows 7 version of how to find your local IP address, Vista is similar.