I have three printers that I need to replace with one, they have all been in use up until recently use the contact form if you are interested. 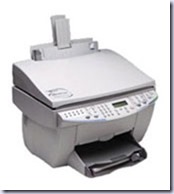 Product Specification
Drivers
Been in daily use since original purchase, new cartridges would be needed.

Product Specification
Drivers
Not used for a while and some broken plastic pieces, new cartridges could be needed. 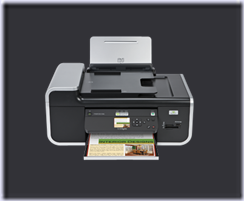 Product Specification
Drivers
Not used for a while I think I have unopened new cartridges around somewhere.

Offers or free to a good home, collect or can deliver locally.

I have spent my career interfacing between the IT companies/departments and the accountant end users solving many varied problems. My current issue is made even worse as it is between two of the best in the business.

Since September 2011 we have had issues using IRIS Accounts Production software, initially with the new iXBRL module and now with their shiny new IRIS Portal menu system.

IRIS has won many awards this year for their iXBRL software but we have only been able to use it by numerous workarounds interrupting the usual workflow of the business.

At the beginning of September last year all twelve of our identical Vista 32 Dell OptiPlex workstations crashed (Blue Screen of Death) when we tried to produce any iXBRL report. In their usual cavalier manner IRIS support blamed Dell and the video drivers/cards. So we added new cards to each machine but found the issue continued.

At the end of September the issue disappeared, machines started working we could file our first returns and go back to issuing invoices on completion we have no idea why.

Bonfire night came and the issue returned with no visible changes to the machines other than the usual Microsoft and AV updates.

Anti virus and firewalls were now blamed and with some reluctance I ran the software on our Small Business server, it worked but the workstations all continued to crash BSOD.

We then installed the then latest version 10.7 on machine 13, an HP machine with more memory than the Dell’s and a copy of the database. We removed Symantec Endpoint and the machine worked. This allowed us to file the returns during the practice’s busiest time but only as a single user system. Running a machine without Anti Virus was something we only did with reluctance.

Once the busy period was over we tried the machine as a network one but again the workstations crashed.

Finally in February we formally complained to the CEO of IRIS – Phill Robinson. This resulted in a more senior support person being assigned. 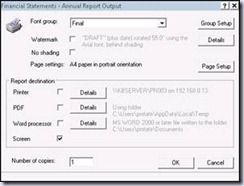 After some investigation it was found that a part of the iXBRL process was using a screen dialog from the Accounts Production area and was removing a tick from a box and causing a BSOD.

The little tick in the Screen box was being removed, this was shown in an ini file.

The engineer seemed to think this was caused by Symantec Endpoint in some way so the tag editor was excluded from all scans Endpoint might make. Moving back to the full server version we also made sure before all iXBRL reports were produced that the Annual Report Output screen had at least one tick in its output section and all was well until …..

We upgraded to 10.9 for iXBRL 2nd generation 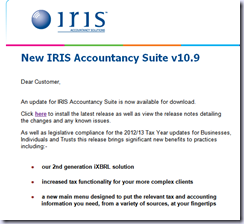 The new IRIS Portal caused our machine’s to blue screen again. This resulted in the IRIS engineers excluding a further four files from being scanned by Symantec Endpoint.

This worked fine on most machine’s but I had left a few not edited whilst Symantec did some investigations from the West Coast of America. In the normal course of events Symantec Endpoint issued an upgrade and when I tried to enter the exclusions in the new client software I found that it was ever so slightly different from previously. Enough that the new exclusions didn’t work.

Symantec had "corrected" several errors in their exclusion module!!

So IRIS say its Symantec, though I have crashed a machine with the client software stopped and Symantec say its poor programming or not using the white list facilities they offer.

I put this rant together to try and see if anyone out there is suffering like we are?

We still want to use the two market leaders, the software packages when they work together do the job exceptionally well. The amount of man hours invested by our end users cannot be underestimated something we need to bear in mind when considering changing.

Rosy put this video together for a visit to Prodrive, I think it is fabulous, talking to her tonight she has several more on her website http://www.rosydesign.co.uk/Rosy_Burke.html

I tweeted about this in June when I first came across it. 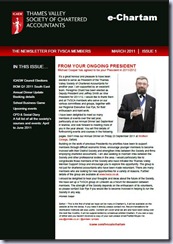 After several months discussing with the various parties involved the first issue of e-Chartam hit the Thames Valley District Society part of icaew.com.

Various District Societies (DS) publish similar newsletters and some are printed and posted and some are available for download on their own areas of icaew.com/regions. The Thames Valley also have a printed magazine that will next hit your post boxes in early May. 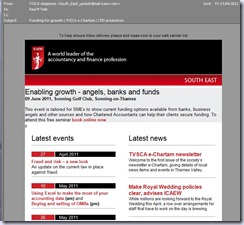 The common factor is that all the societies have trouble providing news to all their members. The newsletter was announced in Stoppress as one of the few methods the DS has of telling members it exists. The opening rate on this sign posting news email that started as something akin to e-Chartam is now very low with a subsequent issue on click throughs to the articles. I believe the Institute’s web experts advise that the size and format of Stoppress is the optimum for reader’s opening it. 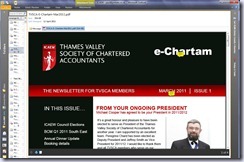 The Institute has issues with being able to email small PDF’s to their members. The belief is that many members will be unhappy if they received the full PDF in their inbox. In the past I believe this was the case but with the advent of reasonable broadband and the fact that Outlook will now allow you to review a PDF in the preview window I find I am receiving more and more optimised PDF’s in my inbox. The big ones (multi-megabytes) are still links on web sites. I would be interested in your views.

Equally with the advent of the Members Preference Centre I believe the old issue of too much “spam” email from the Institute is now over, perhaps you are still on old affiliate marketing mailing lists but these are easily dealt with as no one wants to upset possible customers and the unsubscribe button will usually work. 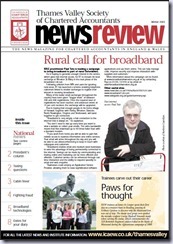 Readers and friends will know I have been involved in Institute communications to District Society members for some time and since the demise of the centrally funded printed newsletter (News Review) I have felt that members deserve more information on what is happening locally and would welcome your views as to how you like to receive that information.

Readers might know I spent some time developing a blog for a UK firm of Chartered Accountants, Kevin Beare & Co, I have nothing to do with the excellent content, just the creation of the blog in WordPress based on their PracticeWeb main website.

However, Paul Beare, the editor of the blog following his excellent content has been awarded for his efforts and now blogs for for the US AccountingWeb website under the name “The UK Voice” 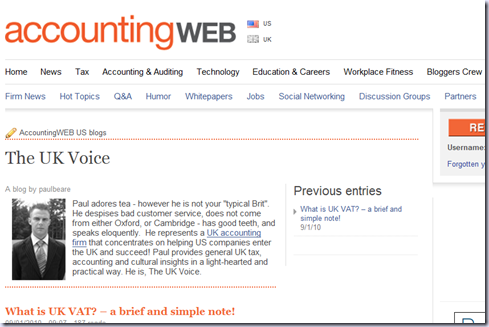 Paul adores tea – however he is not your "typical Brit". He despises bad customer service, does not come from either Oxford, or Cambridge – has good teeth, and speaks eloquently.  He represents a UK accounting firm that concentrates on helping US companies enter the UK and succeed! Paul provides general UK tax, accounting and cultural insights in a light-hearted and practical way. He is, The UK Voice.

If you need help with this type of development including content then please use the contact page.