Looks like the Finnish are way ahead of us, they have come up with a new law making 1Mbps the minimum for all now and 100Mbps by 2015. 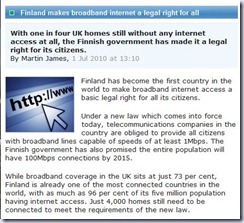 Finland has become the first country in the world to make broadband internet access a basic legal right for all its citizens.

Under a new law which comes into force today, telecommunications companies in the country are obliged to provide all citizens with broadband lines capable of speeds of at least 1Mbps. The Finnish government has also promised the entire population will have 100Mbps connections by 2015.

While broadband coverage in the UK sits at just 73 per cent, Finland is already one of the most connected countries in the world, with as much as 96 per cent of its five million population having internet access. Just 4,000 homes still need to be connected to meet the requirements of the new law.

Finnish communications minister Suvi Linden said the legislation reflected the fact that the internet was no longer a privilege but rather part of everyday life across all strata of society.

“Internet services are no longer just for entertainment,” Linden told the BBC. “Finland has worked hard to develop an information society and a couple of years ago we realised not everyone had access.”

The country’s new law does create a problem enforcing proposed European Union anti-piracy laws, however, which would allow for piracy offenders to have their internet connections cut off. To get around the issue, the Finnish government says it will send letters to suspected offenders.

“We will have a policy where operators will send letters to illegal file-sharers but we are not planning on cutting off access,” Linden said.

In the UK, the roadmap to provide internet access – and in particular access to high-speed broadband services – around the country has become an increasingly high-profile debate, and was a major campaign issue in the recent general election.

The Digital Britain Report lays out the Government’s commitment to provide all homes in the UK with access to web connections of at least 2Mbps by 2012 – though it isn’t guaranteed it by law.